This project is a collaboration between the Institute for Computational Sustainability (ICS), the Harvell Lab (Department of Ecology and Evolutionary Biology), and the Coastal Observation and Seabird Survey Team (COASST) (University of Washington). 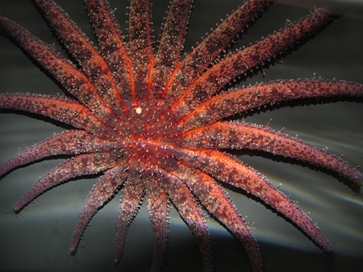 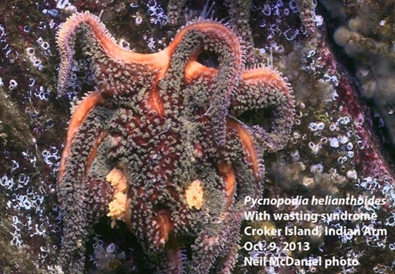 When was sea star wasting disease first noticed?
The first reports of sea star wasting disease were from June 2013 in the Pacific Northwest and Southern California. The disease was then noted in Vancouver in late August, central California beginning in November 2013, and finally in Southern California in December 2013. Cases are now reported from Mexico to Alaska with a spring intensification of the outbreak in northern waters.
Which sea stars is the disease affecting?
The disease has been reported in over 18 species of sea stars, from the Pacific Coast. The most common stars in waters north of Oregon are the ochre star (Pisaster ochraceus), the mottled star (Evasterias troschelii), and the sunflower star (Pycnopodia helianthoides).
What are the signs of the disease?
The key set of signs associated with the disease can differ among species. Sea stars will start to show curling of the arms, then take on a 'deflated' appearance and develop lesions on their arms or central disc. This is followed by loss of arms and spilling of internal organs out of the body. Once dead, they appear to melt, leaving a pile of calcareous spicules and often white bacteria.
What questions are scientists are trying to answer?
Experiments suggest that most sea stars now harbor a virus or bacterium that is making them sick. Although most stars may now be infected, we are trying to understand why they die in higher numbers at some locations than others. We will use the citizen science data to identify whether there is a temperature threshold or some other environmental conditions associated with outbreak and non-outbreak sites. The most valuable data for us is to know what percentage of stars are sick and dead at particular sites and to verify your diagnosis of 'sick' with a photo. If the star is not obviously sick with lesions and arm loss, call it healthy. Although over 18 species are affected, our most valuable data will come from the five most common species, shown on the data input buttons below.

For additional information about the sea star monitoring effort, including a map tracking the spread of sea star wasting along the west coast of North America, or to document observations for additional species not included on this site, please visit the MARINe Sea Star Wasting website: http://www.eeb.ucsc.edu/pacificrockyintertidal/data-products/sea-star-wasting/.

Contributing to this project involves following a specific observation protocol to count the number of sick sea stars of each species, recording the information on a paper data sheet, and submitting the data through a web interface:

Below are preliminary maps of sea star wasting disease prevalence for Pisaster ochraceus, with sizes greater than 5cm, based on the online-submitted and mail-in intertidal data for May, June, July, and August 2014 (updated 9/2).

Starfish are 'just melting': Disease killing 80 percent of them
The Seattle Times

As Starfish Die By The Millions, Scientists Scramble For Answers
NPR Here & Now